It is no secret that Craft Beer has been making major headway the past 5 years, while overall beer sales have been falling, even with a slight improvement in the past year. But for the better part of the last year, many have been getting on the train that chugged along, by way of the Brewers Association, to see Craft Beer raise it’s market share from the unseen 11% to 20% in the next 5 years. Continuous hurdles are popping up at every glance and other unforeseen obstacles are rearing their head before Craft Beer has had a chance to answer up in the initial issues. So how is this supposed to happen? 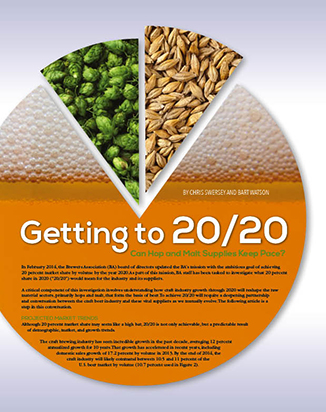 A number of discussions over the past few weeks have put this all into perspective. And my personal biases are only there to support the arguments. While everyone goes into hype about “The Craft Beer Bubble“, which is honestly a discussion I wish people would get over, I feel for craft brewers to get the world where they foresee, a bubble would need to be blown. Maybe the beginning is partially what we are seeing with the current buyouts and expansions of major breweries. The current rate of growth for breweries cannot continue in order to get to the 20% market share goal, but what will is the expansion of the major breweries… as we are already seeing.

The recent announcement of Lagunitas opening a third location only helps to bring focus what actually needs to happen to fulfill this goal, not to mention the major slap in the face to the Macro brewers based on the announced location. It would be interesting to see the way distribution companies move down the line as craft climbs the ladder. Independent companies exist, but they do not have the access or even the interest to see their beers in various locations. While only a small percentage of consumers go above and beyond in finding out where their beer is coming from, I feel a smaller percentage knows who distributes the beer they go out to enjoy. It makes one wonder what arguments people would use to defend their purchases if they knew their favorite beer was distributed in the area by the Miller house. As craft grows, will BMC distribution companies take the hit on money brought in by craft breweries, or will the lines be further blurred? Granted, we are decades away from where that would be an issue but it is a matter of business, just like the Craft Beer industry.

This is news to no one, but if you look at the number 9 craft brewery as of 2014, Stone Brewing Company, the opening of 2 new breweries projected for 2016 and not to mention all of the company stores and the currently on hiatus Stone Hotel, there seems to be a major power play in the works. And, again, news to no one who follows the happening of this industry and their favorite breweries, many Craft Breweries in the top 50, by sales volume, and a ton of local breweries no matter where you are and their size, are opening multiple locations and even shifting their focus to ship beer internationally. Some feel this is an odd move but with the beer that is being produced in America, expanding their reach is what will make the difference in the end.

To accomplish the 20×20 goal, there has to be a big shift in the beer world… but how would that happen? Listen to Sam from Against The Grain Talk briefly on what would need to happen.

The Next Generation of Big Brewers. Posturing. These actions seem to be the necessary evil in the industry to push the Macro brands deeper into obscurity. Will this force the Craft brands into the world of Macro? Quite possibly, but I am not too keen on the phrase “Craft Beer” as it is. Hipster Brewfus said it best.

And this is fact. The small percentage of us are ready to break free from the tag, but the industry is not. It needs “Craft” in this time of growth and investment. When the next generation comes, maybe it will be past the time that a label is needed. Maybe it will go back to just being beer.